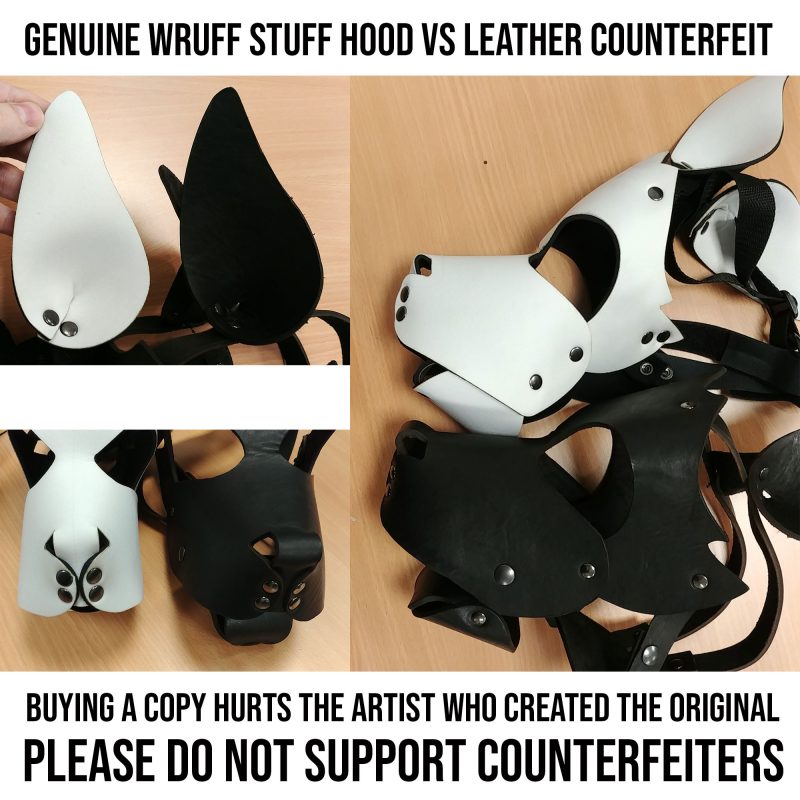 Taking apart the fruit of someone else’s hard work and changing it slightly does not equate to experience.

I spent months working on a pup hood shape. I made mistakes, made corrections, tried, failed, tried again, and repeated that process. That is the correct way. That’s my story. What’s yours? “I took a Wruff Stuff hood apart and copied it.” Really?

Imagine spending a year creating something and then someone comes along and uses the result of your blood, swear and tears as their starting point. How would that make you feel?

Over the past year I have been battling with a thief who first asked me to gift him hoods because he had won a Mr Puppy contest. Almost immediately after receiving it he took it to pieces and made some foam versions to use at a Pride event. He did not ask, he just took. Shortly afterwards he decided he use my hard work and make money from it by making them from leather. Again he didn’t ask, he stole. He didn’t credit, he lied. He still won’t admit that he copied from me, despite the overwhelming evidence. He even photoshopped an ebay screenshot, changing the seller name and painting out the middle strap (which the system of straps that I devised does not have), and pretended that he copied the shape from another maker. The content of what he said demonstrated that he couldn’t tell the difference between one maker’s hood and another, so thought he could get away with lying about having stolen the shape that took a year to perfect.

More recently, on a public forum, someone stated that they’re going to sell counterfeit hoods for much less than the RRP, and after buying a hood in clearance, proceeded to show images of one they made by taking mine apart. They modified the shape slightly, and put some on sale … but not for long. Their friend did the same with one of our fox hoods. They too had a change of heart.

What you receive as a pup hood is all of my experience, and all of the money I spent, all of the love I put into it, and all the hard I have done to make it so damn cute. For someone to come along and, instead of taking that journey, for them to unscrupulously and unlawfully deconstruct a product that I created and use that as a jumping off point for them to sell hoods, that’s wrong. Very wrong. It’s illegal. It’s immoral. I take it personally.

It’s not just about intellectual property theft. I spent over a year developing this product. It is my labour of love.

I did not intend to create a business from the hood I made for a friend, I was very new to the pup scene, I’d only literally only seen one other hood when I started. It was a cheap one. Sure, I looked at it quizzingly but I did not take it to pieces; I used my eyes, my brain and my ability to solve problems. Once I was fairly happy with the shape I tried various materials, and then had to figure out a system of straps as I did not want to use press studs. What I created was great but not perfect. I then spent the next year, tweaking the design.

I’d rather spend money on developing products, helping pup groups, sponsoring contests, or helping creative novice pet-play product makers. I don’t want to spend it on solicitors to stop people from profiting from my hard work, and taking my experience, but I have to protect my intellectual property.

I made a thing. I did it well. I worked hard on it.

Counterfeits are not worth the money

Taking apart the fruit of someone else’s hard work and changing it slightly does not equate to experience. The leather hoods that we make are backed with neoprene so that it doesn’t scrape leaving your face with red marks after wearing it for a while. Why do we make this effort? Because it matters. If you want comfort, if you want a completed product, if you want to take advantage of experience, buy from those who’ve taken the journey to make a product consumer friendly. Conterfeiters don’t care that they stole someone’s hard work, why are they going to care that it’s uncomfortable to wear?

If you want to be proud of something, take the long way round. Yes it’s hard work, do the hard work.

I will help creatives but not counterfeiters